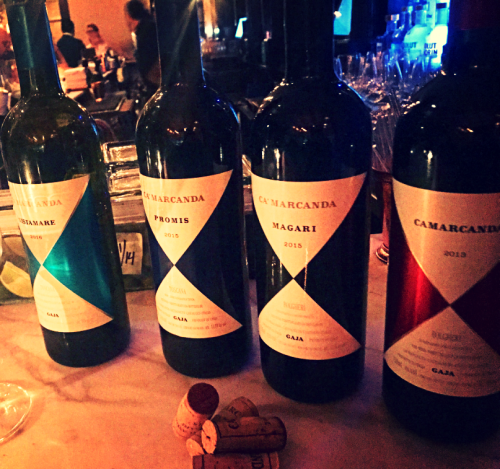 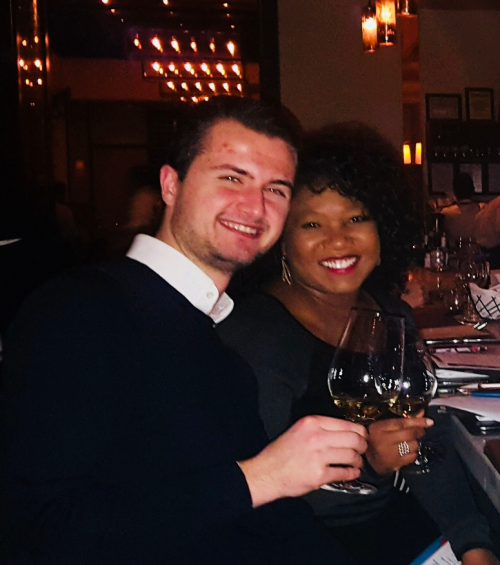 When your name is known around the world for producing some of Italy’s most extraordinary wines, staying in the relative comfort zone of your vineyards in Piedmont would be the safe thing to do. Lucky for us, the Gaja family does not believe in playing it safe. Gaja’s winemaking roots in Piedmont run deep and can be traced back to 1859. But Gaja’s journey towards icon status really kicked off in 1961 when Angelo Gaja began working at the family winery after completing studies in enology at Alba and Montpellier. Angelo introduced innovations that revolutionized winemaking at his family’s winery and he is widely credited for single-handedly establishing Barbaresco’s reputation as one of the world’s great wine appellations.

Giovanni Gaja generously shared his family’s Ca’ Marcanda wines and their winemaking philosophy with me.

So why Tuscany? This is the question that I posed to Giovanni Gaja, Angelo’s son and the 5th generation (along with his older sisters Gaia and Rossana) of this winemaking dynasty. With a smile he replied that the family’s 150+ years of experience with Nebbiolo had emboldened them to say “let’s try this with Brunello,” so in 1994 they ventured to Tuscany and purchased Pieve Santa Restituta winery in Montalcino. In 1996 they acquired Ca’ Marcanda – a stunning estate in Bolgheri, in the Tuscan coastal region of Maremma. But even with a name like Gaja, securing the property in Bolgheri took tremendous patience and tenacity. Angelo Gaja spent so many hours convincing the property’s previous owners to sell him the estate, the family decided to name their hard-fought jewel Ca’ Marcanda, which is the Piedmontese term for “house of endless negotiations.” 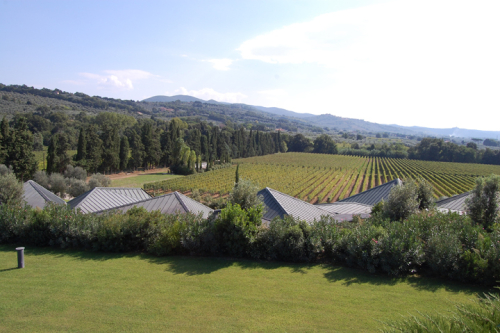 Gaja’s persistence paid off beautifully and the wines of Ca’ Marcanda eloquently express their Tuscan terroir and the skill of the winemaker. The first winery from the Gaja family that was designed and built from the ground up with Angelo’s vision, Ca’ Marcanda is a deeply personal venture and a source of pride. 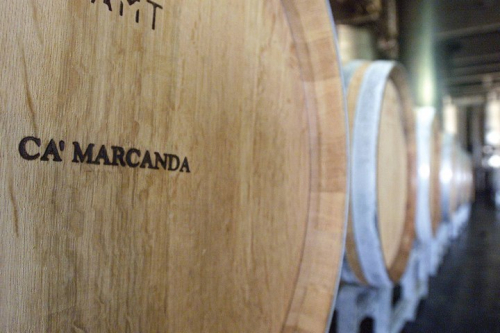 As the youngest of the Gaja siblings, Giovanni and Ca’ Marcanda are so close in age that they essentially grew up together and Giovanni jokes “Ca’ Marcanda was my puppy.” Giovanni has a strong emotional connection to Ca’ Marcanda and during our conversation it became clear that it isn’t just another winery in their portfolio but an essential part of the ongoing Gaja legacy of innovation and excellence. 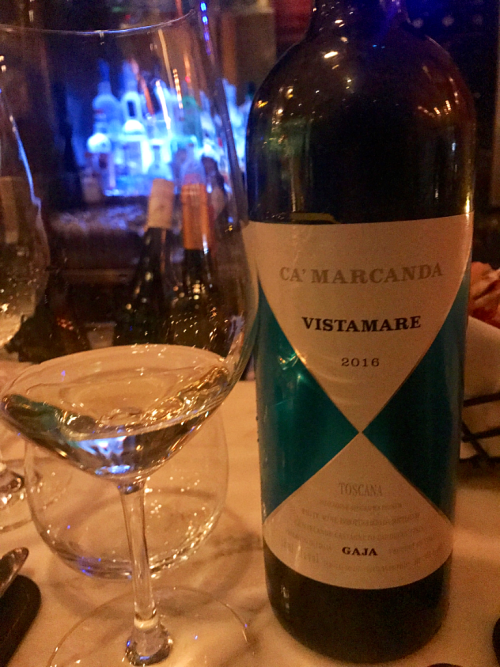 Ca’ Marcanda Vistamare 2016 ($65) is the only white wine produced by the estate. Vistamare means sea view and the vineyards used to craft this wine are subtly influenced by the salt air. A blend of Vermentino and Viognier, Giovanni describes this crisp but luscious white wine as a fine example of “opposites attract.” Vermentino thrives in the sea breezes and Viognier prefers the heat, but together they create something special and absolutely delicious. Viognier’s rich velvety nature is given superb structure from the acidity and minerality of the Vermentino. Vibrant and harmonious, Vistamare is a winner. 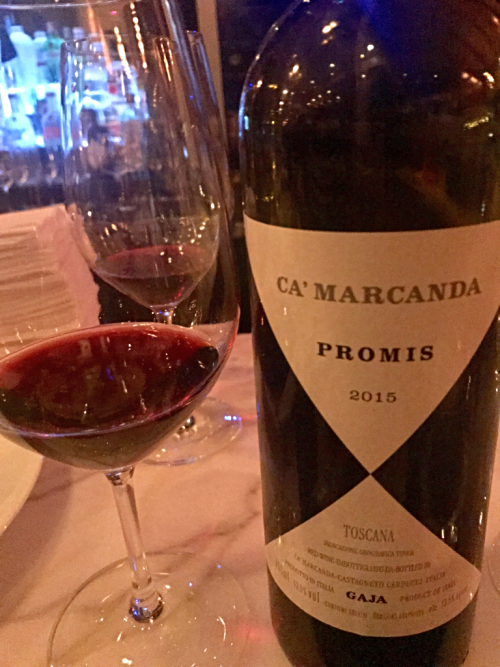 A beautifully balanced blend of Merlot, Syrah, and Sangiovese Ca’ Marcanda Promis 2015 ($48) is a great introduction to Gaja’s Tuscan reds. A truly Mediterranean style with a fresh tapestry of sweet, savory, and herbal flavors, Promis is silky and graceful. 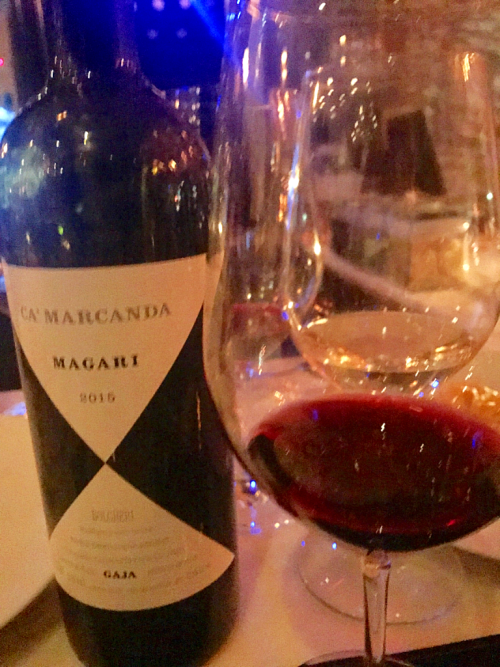 The vineyards for Ca’ Marcanda Magari 2015 ($65) are further away from the sea and the richer soils impart the wines with intensity and depth. Magari means “if only it were true” and this blend of Cabernet Franc, Cabernet Sauvignon, and Petit Verdot is the real deal. Rich but not overwhelming, Magari has layers of ripe dark berry flavors with savory herbal accents. Quite a sexy vino! 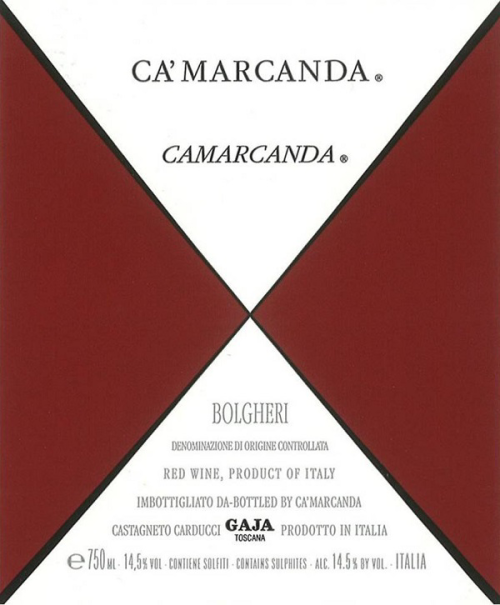 Only produced in exceptional years, Camarcanda 2013 ($145) is the estate’s namesake and flagship wine. A blend of Merlot, Cabernet Sauvignon, and Cabernet Franc, the grapes were cultivated in white soils, rich in calcareous clay, that are ideal for crafting wines with long aging potential. Deep in color and flavor, this is a wine that demands that you take your time to savor its complex charms.

Made with passion and expertise by a family with a rich legacy, the wines of Ca’ Marcanda are absolutely captivating.

From www.blackdresstraveler.com by Wanda Mann

Logo and trademark Ca’ Marcanda as well as all trademarks and designs of the wines and others with all related rights are the exclusive property of Ca’ Marcanda, Santa Teresa 272, Castagneto Carducci, Italy, +39 (0)565 763809, Email: INFO@CAMARCANDA.COM